Earlier this year, we shared the news about Orwak’s sponsorship of the charity project “Team Rynkeby”, where 2100 participants cycle to Paris for the benefit of seriously ill children. Today, the race is on and the long cycling towards Paris starts. We wish all participants good luck and we are proud of our co-worker Anders Lorentzson, who is one of the committed cyclists!
The official start is in Malmö, Sweden, today Friday, but some members of the local team, including Anders, decided to start cycle yesterday from the town Värnamo here in the neighborhood to actually cover the entire distance to Paris by bike! Participating in Team Rynkeby is a great personal commitment both through active involvement in the sponsorship and through hard training sessions for many months. 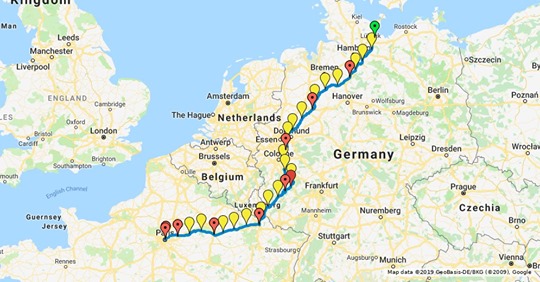 For Anders it has resulted in countless hours of spinning in the winter and a total of 3200 cycled km on the roads in April-June regardless the weather.  The team will cycle 180-260 km per day and the tour will run through Germany, Luxembourg and France before it finally ends in central Paris on Saturday July 6th! Follow the entire race live here: http://www.team-rynkeby.com/live2019

The Orwak employee Anders is a seasoned cyclist and over the years he has participated in many challenging bike races; among others the impressive “Den Store Styrkepröven” of 540 km from Trondheim to Oslo in Norway and “Joutunheimen Rundt” in the same country in tough terrain in the mountains . He feels well prepared and motivated for the upcoming Team Rynkeby 2019 tour and describes it in his own words:

“Now it’s close! On June 28, we head off towards Paris, Then it’s time for me and Team Rynkeby to start our cycling trip to Paris. A week later,  on July 6, we will reach Paris after pedaling 1400 km! This project has been running for many hours both through fundraising, spinning and miles on the roads and soon it is time for the big challenge and cycling to Paris will be the final of the fundraising project we started in September 2018! “

Read more about the project